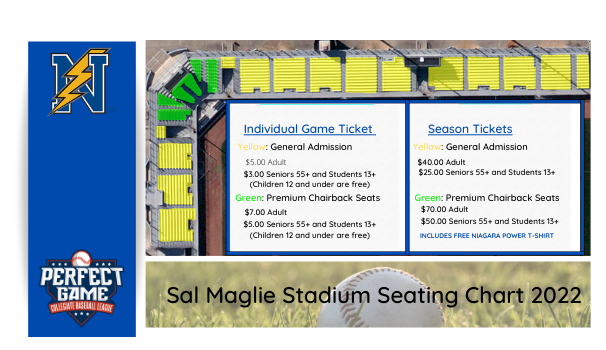 Ticket holder ("Holder") is admitted on the condition, and by use of this ticket, Holder agrees that: (a) he or she shall not transmit or aid in transmitting, or make or aid in the making of any commercial use of, any information about the game to which it grants admission, including, but not limited to, any account, description, picture, video, audio, reproduction or other information concerning or in connection with the game, the players or the ballpark (the "Game Information"); (b) the Niagara Power Baseball Club, owned by Niagara University. ("Niagara Power") is the exclusive owner of all copyrights and other proprietary rights in the game and Game Information; and (c) the Office of the Commissioner of Baseball, PGCBL, The PGCBL Digital Network (the "PGCBL Entities") and the Niagara Power, and each of their respective agents and licensees, shall have the unrestricted right and license to use Holder's image, likenesses, name, voice, comments or other proprietary or public rights and that of any minor accompanying Holder in any live or recorded broadcast, telecast, photograph, video, audio sound, audiovisual and/or other recording taken in connection with the game or other transmission, distribution, public performance or reproduction in whole or in part of the game, for all purposes, worldwide in perpetuity and in any and all media now or hereafter known, without consent or compensation. The rights granted herein to the Niagara Power and the PGCBL Entities are assignable. Breach of any of the foregoing by Holder will automatically terminate this license and may result in further legal action.

The Niagara Power reserve the right to revoke the license granted by this ticket, with or without cause, by tendering to the Holder any monies paid by the Holder to the Niagara Power for the ticket, excluding service charges. Holder is subject to all rules and policies of the Niagara Power, including those set forth in The Niagara Power A-Z Guest Guide to Sal Maglie Stadium, and all applicable laws, rules, policies and regulations of the PGCBL Entities, the City of Niagara Falls and Niagara County. The Niagara Power reserve the right, without refund of any portion of the purchase price printed on this ticket, to revoke the license granted by this ticket and refuse admission or eject any person that the Niagara Power deem to be in violation of such laws, rules, policies or regulations. Holder consents to security searches and/or screening, including allowing the Niagara Power and/or their designees to inspect his/her person (and that of any minor accompanying Holder) and any bags, clothing, or other articles for security purposes, by any means determined by the Niagara Power. Any dispute, claim or cause of action regarding the terms of this ticket, attendance at a game or any related activities, or sales or resales of a ticket, shall be brought (i) individually, without resort to any form of class or collective action, and without joinder or consolidation of claims of third parties. Any award and any confirming judgement applies only to the arbitration in which it was awarded and cannot be further used in any other case except to enforce the award itself. This ticket may not be used for advertising, promotions (including contests, sweepstakes or giveaways) or other trade or commercial purposes without the express written consent of the Niagara Power. This ticket may not be resold or offered for resale in a manner, at a price or otherwise in violation of any Federal, State or local laws/ordinances/regulations; any such resale will invalidate the license granted by this ticket.

WAIVER AND RELEASE OF LIABILITY

By use of this ticket and attendance at this game, Holder (on behalf of Holder and any minor accompanying Holder) acknowledges and assumes all risks and dangers incidental to the game, attendance at the game and the sport of baseball, whether occurring before, during or after the game, and whether in or around the ballpark, including, without limitation, any pre-game, in-game or post-game activities, any warm-ups or practices, any promotions, competitions or attractions, or any other related activities, whether such risk or danger occurs prior to, during or subsequent to any such game or activity, including specifically (but not exclusively) the danger of being injured by thrown or batted balls; thrown bats or fragments thereof; thrown equipment or pieces thereof; thrown, dropped or launched items and projectiles; other hazards or distractions; spectator conduct; and any incidents or accidents associated with crowds of people, and agrees that none of the Niagara Power, the PGCBL Entities, and/or the participating clubs, or their respective past, present or future affiliates, owners, partners, officers, directors, employees, agents, players, managers, coaches, representatives, customers, purchasers, independent contractors, licensees, exhibitors, sponsors, vendors, volunteers, successors and assigns, or the City of Niagara Falls or its lessees (the "Released Parties"), shall be responsible or liable for any personal injury (including death), property damage, or other loss suffered as a result of such risks or dangers and/or resulting from the negligence of any Released Party. BY ATTENDING THIS EVENT, HOLDER (ON BEHALF OF HOLDER AND ANY MINOR ACCOMPANYING HOLDER) IS DEEMED TO HAVE GIVEN A FULL RELEASE OF LIABILITY TO THE RELEASED PARTIES. IF HOLDER DOES NOT WISH TO OR IS NOT AUTHORIZED TO GRANT ALL THE RIGHTS, RELEASES AND WAIVERS SET FORTH IN THIS TICKET ON BEHALF OF ANY ACCOMPANIED MINOR(S), HOLDER SHOULD IMMEDIATELY ACCOMPANY THE MINOR(S) OUT OF THE BALLPARK.